This project, initiated in 2015, entailed restoring the iconic arch's south side and rooftop to as-new condition. More than 300 people took part in the work to upgrade the 41 floors of offices and other facilities (including a canteen, gyms and equipment rooms), bringing them into compliance with the most demanding energy efficiency standards. 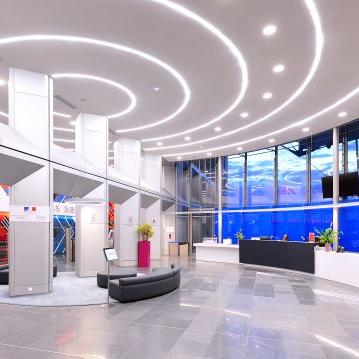 Eiffage Énergie Systèmes contributed to this ambitious project, handling the high- and low-voltage electricity, HVAC and smoke removal, plumbing and fire sprinkler work packages. One of several notable features of the project to renovate this major Parisian landmark is a system of three 400m³ basins located on the fifth basement floor, in which low-cost energy is stored overnight before being released to many areas of the building (including meeting rooms and computer rooms) during the day.

In summer 2017, the rooftop and viewing platform were officially opened to the public, offering 360° views over Paris and its suburbs.